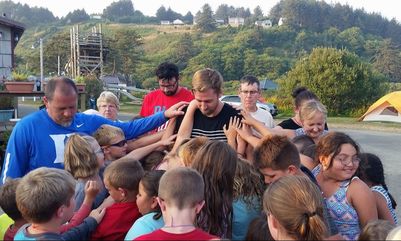 Six nights and seven days. What in the world is God doing in the world? If that thought has ever crossed your mind, this family camp is for you.  If the final words of Jesus to His disciples, the Great Commission found in Matthew 28, are important to you, then Week of Missions is for you.

Our speakers are drawn from those who are actively involved in crossing cultures to share the good news of Jesus Christ.  The Bible Lecturer opens the Word of God and plumbs its depths to encourage and challenge us to obey the call to “go and make disciples.”

The purpose of Week of Missions is to further the cause of New Testament Christianity through cross-cultural missions by:
Spending a week among a group of people who pursue the purpose of making a difference in the world for the sake of the Gospel will change your life and send you home with renewed purpose and passion.

Camp in your RV, tent, or stay in one of our cabins. Cabins fill up fast, so be sure to register early! Consider sharing a cabin with another family and split the fee - we have cabins that sleep up to 15 people.
​
Delicious meals are available for purchase in the Dining Hall.
​Missionary Care Team
During Week of Missions we have a missionary care team available to all missionaries in attendance. Our Missionary Care Team consists of Corey Lemke, former missionary to Ukraine and a Life Coach, Nancy Spears, Family and Marriage Therapist and Steve and Becky Overlin, Missionary Care with Pioneer Bible Translators. The purpose of the Missionary Care Team is to be available to missionaries for coaching, debriefing and counseling.
During the 2020 Week of Missions the missionary care team will host a missionary reception. The reception will be held Monday afternoon, July 27th in the mezzanine of the Missions Building. This will be a time of fellowship, networking, encouragement, prayer, and refreshments. We also pray this will be a time for you to get to know the Missionary Care Team better and be comfortable utilizing us for coaching, listening to your story, debriefing and counseling.
We look forward to seeing you at Week of Missions!
~Corey, Nancy, Steve and Becky 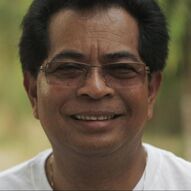 Christopher LaPel
Founder of Hope for Cambodia
Christopher LaPel was raised in Phnom Penh, the son of a Buddhist priest who served as one of nine advisors to King Norodom Suramarith and later to Prince Sihanouk.  In 1975 Khmer Rouge soldiers ordered the LaPel family out of their house with most other people who lived in Phnom Penh.  That began a genocide which did not end until 1979.  During that time Christopher lost both parents, his brother and sister.  He eventually escaped Cambodia and came to a refugee camp in Thailand, where found Christ and later his wife Vanna.  Christopher and Vanna were resettled in Lincoln, Nebraska where he worked in the Refugee Resettlement Program for five years and had three sons.  In 1988 Christopher was called as pastor to the English and Cambodian congregations of Golden West Christian Church in Los Angeles, where he serves to this day. Christopher graduated from Hope International University. He established a training site in Battambang, led in building a modern facility to the for the Leadership Training Institute and the Hope Bible Institute, provided training for over 300 church workers, and church planting began in earnest.  Today there are over 150 churches planted in Cambodia through the Hope For Cambodia Mission. 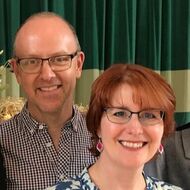 Aaron & Diane Lincoln
CMF International, England
Aaron and Diane live in the town of Rugby, where they partnered with Bilton Evangelical Church to plant the BEC-Cawston congregation. They are involved in a variety of outreach projects that connect with people to point them to Christ. They work with BEC to multiply mission efforts through training others to make disciples and start missional communities.

The Lincolns moved to England in 1993 and worked with the Great Britain Field Team to plant and serve the Christian Celebration in Northampton and the Dickens Heath Village Church in Solihull.

Jon Taylor
Executive Director of Coaching Mission International
Jon Taylor serves as Executive Director and is a part of the Leadership Team and a member of the Training Team. He spent 13 months in Zimbabwe with his family when he was 10 years old and has led multiple short-term trips to Guinea, Kenya, and Mexico. He was part of the first CMI MCT coach training cohort. He was on staff at First Christian Church of Phoenix, AZ for 17 years prior to joining CMI, including 10 years as Lead Pastor. He is also a Consultant for CSA Perspective and is a Certified Trainer with Leading From Your Strengths. Jon married June in 1986, and they live in Phoenix, AZ near their 2 adult sons.

Michelle Schubert
Pioneer Bible Translators
Michelle is a Missionary Recruiter for Pioneer Bible Translators. Michelle is from Yakima, Washington and spent time studying at both the University of Portland and the University of Washington before being signed to the Trinity Western Spartans women’s cross country team. She enrolled at Trinity Western University in 2014 and studied philosophy and linguistics with a focus on Bible Translation. You may have seen her on American Ninja Warrior and/or Survivor.
Haruka Otsuka
Osaka Bible Seminary, Japan

Stephen Wongratanamajcha
Founder of Asians for Christ
Stephen is Lisu. His journey began in a small Lisu village. You see, Stephen's father was the leader of that remote animistic Lisu village in Northern Thailand where the name of Jesus was never even once heard. One day, God came and spoke to his father and, from then on, delivered their family from the grasps of Satan. His family was one of the first Lisu families in Thailand to convert to Christ. Praise God! Through persecutions and challenges, Stephen went into ministry and began to spread the Word. He married his wife, Mary; they have 4 kids: Becky, Nick, John, and Isaac. Stephen finished his Biblical education in the States through the support and love of Church families and friends in America. Currently, Stephen has  been doing Missions for over 30 years, targeting the Lisu people group in Southeast Asia and China. By the blessings of our God, his team has converted and baptized over 5000 people (Lisu among other groups of people) in the past 7 years.

Stay tuned for our final missionary announcement and updates!